Skip to content
Posted on August 1, 2022 by Daniel Arrhakis 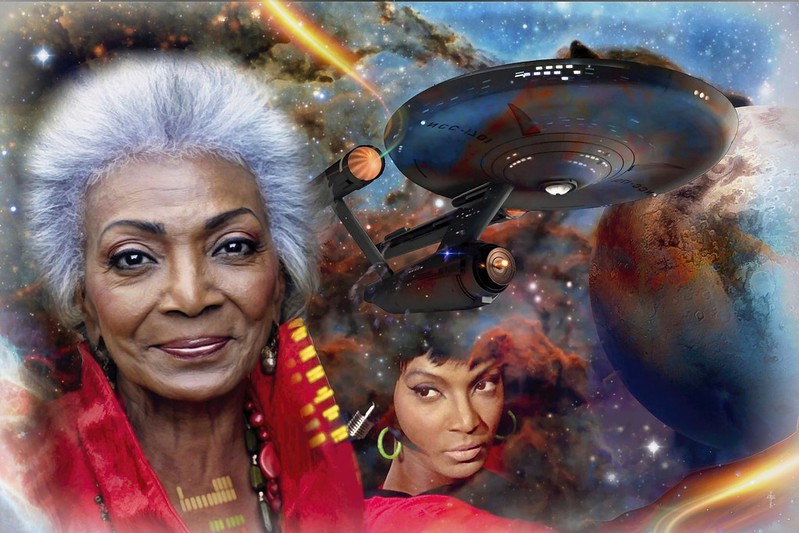 Nichelle Nichols, born Grace Dell Nichols in December 28 of 1932, was an American actress, singer, and dancer best known for her portrayal of Nyota Uhura in Star Trek series, a translator and communications officer who specializes in linguistics, cryptography, and philology.

Nichols’ portrayal of Uhura was ground-breaking for African American actresses on American television.
From 1977 until 2015, Nichols volunteered her time to promote NASA’s programs, and to recruit diverse astronauts, including women and ethnic minorities.

In 1982, Robert A. Heinlein dedicated his novel Friday to her. Asteroid 68410 Nichols is named in her honor.

She helped break ground on TV by showing a Black woman in a position of authority and who shared with co-star William Shatner one of the first interracial kisses on American prime-time television.

This is my tribute to a unique Woman and actress !

Portuguese Digital Artist And Creative Photographer, born in Pavia in 1966, administrator of various groups of creative photography and digital art on various websites and platforms. The Mystic Surrealism is his main theme of work. The mystery and faith in a better world commands his Life and Art. A triptych, surrealistic or other contemporary look at the mystical world stuffed with stories and characters is developed by the author through his pseudonyms: Daniel Arrhakis, Karl Rudhyn, Pethros Thoryan and Daniel Red Dragon 丹尼尔 · 龙, the latter for the Digital Art of Asian Inspiration. Creator Of The Mystic Tragedies Of Theodhatres and The Fables of Thelius Dharyan. With several works published on websites, magazines, articles and online newspapers of politics, religion and art, as well as some exhibitions try to promote Creative Photography and Digital Art as valid arts, with great contemporaneity, promoters of debates and dialogues between the Past and the Future in a context of promoting cultural, social and human values. The Prophets of Ion is a mystical theosophical humanistic movement founded by Daniel Arrhakis in 2016 whose main objective is the defense of Natural Life And Natural Spirituality. The Humanistic Mystic Movement was founded by Daniel Arrhakis in 2018, where the Spiritual Man is a promoter of a more inclusive, participatory, environmentally friendly but also humanistic society. One cannot conceive of a humanism without its intrinsic natural spirituality.
%d bloggers like this: